Many of these were initially selected for biopsy/excision as a result of change detected on digital dermoscopic monitoring rather than the presence of any described dermoscopic feature of melanoma.

On review of dermoscopic images of these lesions, 21 (78%) of these melanomas showed evidence of a dermoscopic appearance previously undescribed in the literature (but previously reported on this blog), the presence of “large polygons”.

These polygonal shapes may be obvious and complete or subtle and incomplete. They are defined by darker grey or brown relatively straight lines, or by darker (sometimes only barely so) surrounding lesional pigment or a combination of the two. They are much larger than the rhomboidal structures seen in facial lentigo maligna and may be rhomboidal, pentagonal, or hexagonal. In some cases the large polygons do appear to be centred on follicular openings, as in lentigo maligna of the face, but this is not a constant.

I have termed these shapes “large polygons”, in contrast to the smaller rhomboidal structures seen in facial lentigo maligna.

Large polygons usually occurred within a pigmented lesion that had lentigo-like pigment patterns, but lacking the sharply defined scalloped edge usually seen with solar lentigo. Grey dots or other grey structures were a frequent accompanying finding. Occasionally lesions also had a few assymmetrically pigmented follicular openings, a feature also described with facial lentigo maligna, but not previously described in other locations. 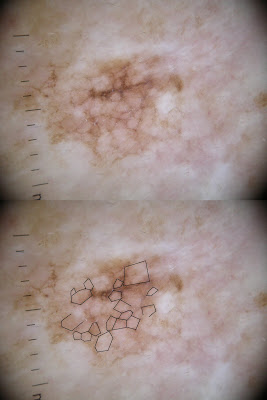 Figure 1. A 7 mm diameter lesion on the forearm of a 67 year old female. There are obvious large polygons in this in-situ lentiginous melanoma. The background pattern of the lesion appears to be a solar lentigo-like homogeneous light brown, but with some edges lacking the typical sharp cutoff of solar lentigo. 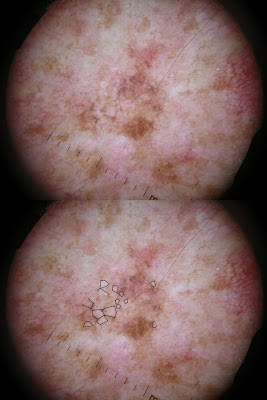 Figure 2. A 7.5 mm diameter lentiginous melanoma in situ on the upper back of an 80 y.o. male. Note the background pattern of light brown network with some “fingerprinting”, a pattern described as present in solar lentigo; but the sharply demarcated scalloped border of solar lentigo is absent. To the left of the image there are obvious large polygons defined by grey lines (formed of aggregations of grey dots). More subtle polygons defined by darker surrounding pigment are present elsewhere. 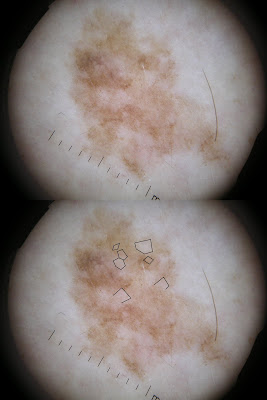 Figure 3. A lentiginous melanoma in situ on the lower leg of a 69 year old female. Not all large polygons are obvious and defined by darker lines (as in Figures 1 and 2 above), but careful inspection reveals the presence of paler large complete and partial polygonal shapes bounded by slightly darker lesional pigment. Again, the background pigment pattern of this lesion is that which is described for solar lentigo, but lacks the typical border of solar lentigo.

Early diagnosis and surgical treatment remains the standard of care for melanoma and results in the best survival outcomes. Not all lentiginous melanomas-in-situ are as innocuous as is postulated by some: lentigo maligna is a frequent association with desmoplastic melanoma, and other invasive melanomas can arise in lentiginous melanomas, including invasive naevoid lentiginous melanoma. Non-facial lentiginous melanoma may be subtle, especially on sun-damaged skin. Such lesions may well be passed over as lichen-planus like keratosis or as solar lentigo if the specific features described are not sought or recognised.

It is sometimes easier to perceive the shapes and outlines of these large polygons when looking at a lesion's overall morphology, rather than focussing on the details or on zoomed photographic views. The author has found the lower resolution screen images rendered by the MoleMax computerized videodermoscope useful in this regard, although other equipment should be able to give similar effects.

Colleague Dr Peter Bourne has suggested that the combination of the features below could be considered useful in the diagnosis of these lesions:

Use of these features has been informally trialled by colleagues who have reported them useful in identifying non-facial lentiginous melanomas that may otherwise have been overlooked, but the sensitivity and specificity of these features has not been determined. In the experience of the author, there are very few non-melanocytic false positives, nor is the NNT increased by applying these criteria.

The polygonal shapes formed by the straight line/borders may also be more complex and irregular than has been described and this bears further examination.

Histopathological correlation with the features observed is difficult, but the darker lines in some cases appear to correspond to collections of melanophages and may represent a stage in regression. Why the patterns in these lesions should form these geometric shapes bound by straight lines and why some of these shapes appear to be centred around follicles is unknown and bears further study.

I should like to acknowledge the constructive comments and input by Dr Cliff Rosendahl, Dr Alan Cameron, Dr Greg Canning, Dr Lester Cowell and Dr Peter Bourne during the development of this concept over the past years.

A compact PDF version of this with smaller images can be downloaded here.

Dr Cliff Rosendahl
Cliff Rosendahl works in private practice but as an Associate Professor at the School of Medicine, The University of Queensland (Brisbane,Australia) and a Fellow of the Skin Cancer College of Australasia he is involved in research aimed at improving the detection and management of melanoma and other skin cancers. He is also the administrator of the Melanoma Signature Skin Cancer Network. www.melanomasignature.blogspot.com and director of the Skin Cancer Audit Research Database (SCARD).